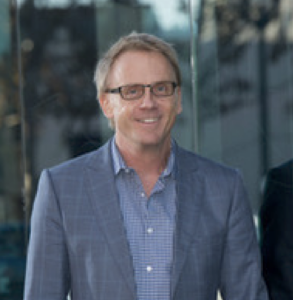 This week on the Rise and Thrive OSJ Radio Hour we have the pleasure of interviewing Tom Braegelmann over zoom. Tom is the Founder of MasteringRE, Author of the book  Mastering Real Estate Investing with Private Money, CEO & Founding Partner of GCA Secured Investments, and Senior Fund Manager at Kensington Fund. With over 30 years of real estate investing experience, Tom guides investors to smarter, more profitable, and safer returns by simplifying the real estate investing experience through a passive and collaborative profit-sharing model.
View the Website: MasteringRE.com

You can read about Tom’s book, “Mastering Real Estate with Private Money” and purchase on Amazon

This week on The Rise & Thrive OSJ Radio Hour, Saturday morning at 9:05AM on KZLS The Eagle 1640AM, we are interviewing Bob Loudermilk in studio. The entrepreneurial drive grabbed a hold of Bob Loudermilk when he was just 13, leading him to start a neighborhood newspaper and selling them door to door. Since that time, Bob’s career has had a few twists and turns, but at the heart of it has always been his desire to serve his community and help others succeed. Bob has been in the event business for over 20 years, planning and organizing meaningful seminars and expos around the country.

Bob and his family moved to Oklahoma City over 5 years ago to be near his wife’s father, Jerry Cutter, who just celebrated his 90th birthday. Bob’s latest venture was to partner with Robin Gunn to create the first annual Second Half Expo, coming to the National Cowboy & Western Heritage Museum on Saturday, October 16th, from 9am to 4pm.  The focus is on “everything for the 50+ generation.” We’ll talk to him about the upcoming Second Half Expo, as well as the talk he will be giving at the event, entitled: “The View Is Better, Above 50.”

This week on The Rise & Thrive OSJ Radio Hour, Saturday morning at 9:05AM on KZLS The Eagle 1640AM. In studio: Fontana Fitzwilson, the Executive Vice President of Williams & Williams.

Fontana Fitzwilson is the Executive Vice President of Williams & Williams  and has been with the company since 2006. Fontana spearheaded the effort to launch the company’s commercial and luxury real estate auction divisions. In addition to working with sellers with a high net worth, she currently serves as the liaison for a portfolio of Fortune 100 & 500 clients that include AT&T, Bayer, Bank of America, Halliburton and Schlumberger and many others. She launched the company’s online bidding platform AuctionNetwork.com in 2007, creating one of the first online real estate trading marketplaces.  She is a cum laude graduate of the University of Tulsa and is a licensed real estate broker in Oklahoma, Florida, Maine and a licensed real estate agent in the State of Georgia. 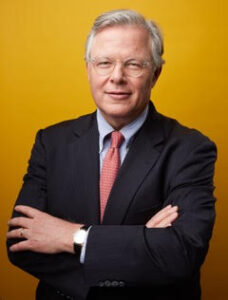 This week on The Rise & Thrive OSJ Radio Hour, Saturday morning at 9:05AM on KZLS The Eagle 1640AM. In studio: Clifford Hudson, Former CEO of Sonic and keynote speaker at the second half expo at 2pm on October 16, 2021 at the National Cowboy and Western Heritage Museum. Everyone is welcome!

Clifford Hudson spent his career at Sonic Corp., most recently as Chairman of the Board and Chief Executive Officer of this restaurant operator and franchisor. He left the company upon its sale in December 2018 and joined Crowe & Dunlevy. In 2020, Harper Collins published Cliff’s first book entitled Master of None: How a Jack of All Trades Can Still Reach the Top. 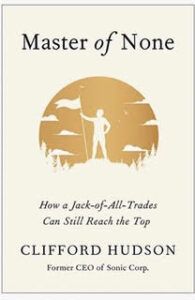 You can order Cliff’s book at his website: www.cliffordhudson.com

Clifford will be the keynote speaker at the second half expo at 2pm on October 16, 2021 at the National Cowboy and Western Heritage Museum. Everyone is welcome! Visit the Website: secondhalfexpo.com

Robin is interviewing through zoom, two more Oklahoma Senior Game athletes from Tulsa, Oklahoma! Tune in this Saturday, Sept. 4, at 9:05 on KZLS 1640am The Eagle. See athletes below and their bios.
The OSJ is a platinum sponser for this event.

Contact info is OKseniorgames.com 405-821-1500 info@okseniorgames.com
the dates for the games are sept 4- oct 30 and to enter games, you must sign up 2 weeks previous to the game you want to compete in.

Dr. Tom Allen is broadly published in the areas of pulmonary medicine, human physiology and sports medicine. Dr. Allen was the founding director of the sports medicine residency at Oklahoma State University. A competitive athlete since his schooldays he continues to compete in track and field focusing on the short sprints and the pole-vault.

James Mcfadden is  81 years old and a lifelong runner from Tulsa. He ran his first race in 1955 as a 15 year old and was a state champion in high school, an all-american in college and ran in the olympic  trials for the US Army team. After the army, he turned to road racing and marathons, where he went on to win races in 35 states. In his 20’s, he set a state record for the marathon. He has also been a high school coach and art teacher for the last 40 years.
Over the years, he has won several running and walking events in the Oklahoma Senior Games. He has also won events in the Arkansas, Kansas, Missouri, Colorado, Wyoming, Nebraska, and Mississippi Senior Games.

Click here for Information about the Oklahoma Senior Games 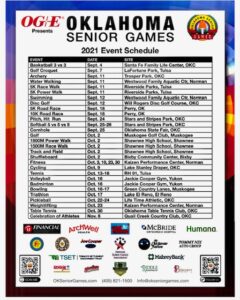